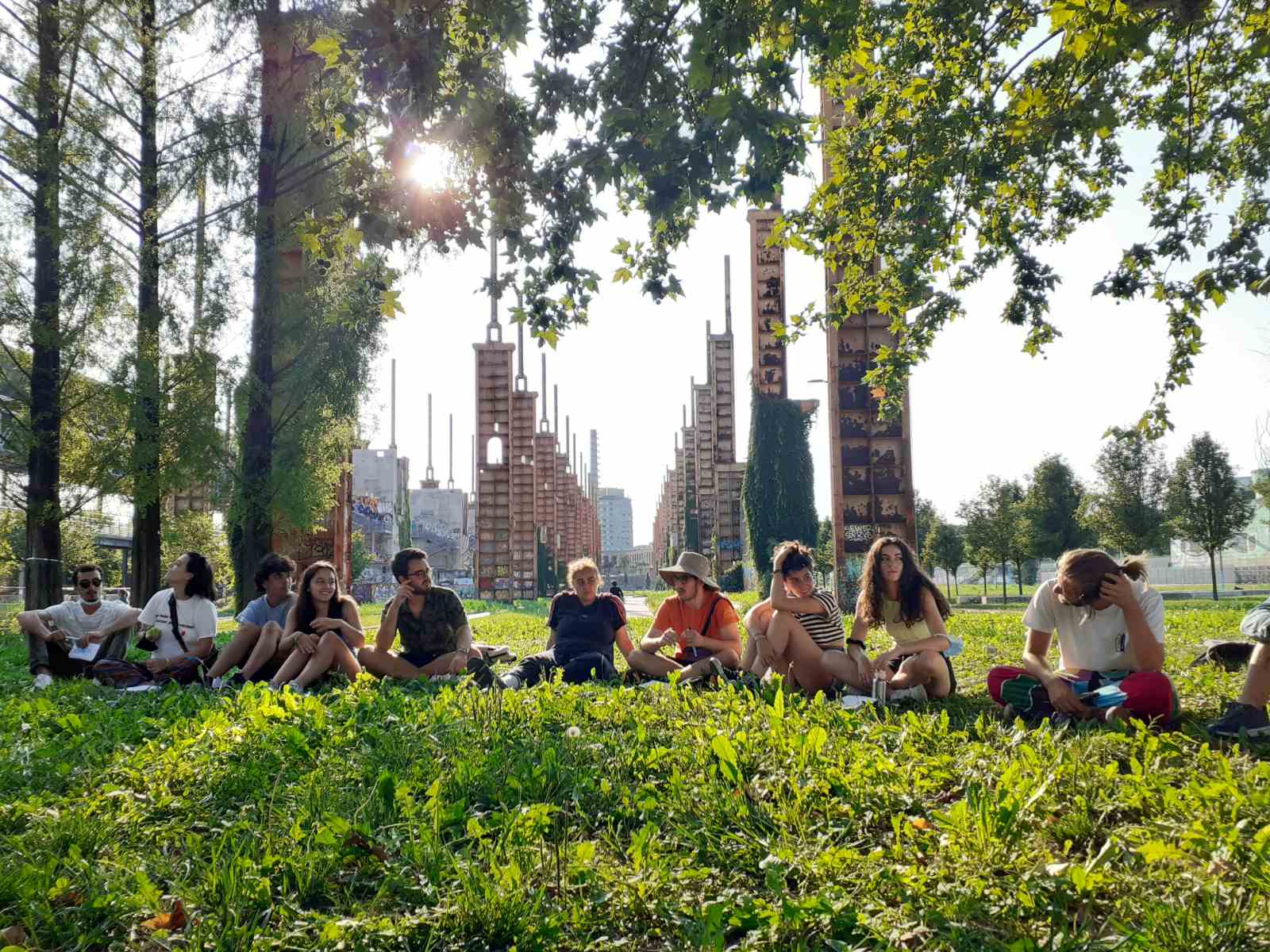 From 7 until 15 of August 2021, we, in the role of volunteers from Volunteers Centre Skopje had the opportunity to participate in the youth exchange “I love you…rban!” held in Turin, Italy. During the youth exchange, we were able to share our opinions on issues like racism, violence, and nationalism with our peers from Italy, Portugal, Spain, Belgium, and Denmark. By reflecting on how society deals with these issues and sharing personal experiences, we understood the necessity of raising awareness.

Our activities consisted of national workshops followed by discussions and personal reflection. To understand more about each other’s cultures, we had intercultural nights during which we played some traditional music, played quizzes, eat traditional food from our countries.

Each one of us as a participant had the task to give a short description of the workshops we attended during the project, so here is our summary.

In the middle of Park Dora where an old, abandoned, industrial zone meets modern art, nature, and freedom of movement, we participated in the Danish workshop.

According to the wise words of Carl Gustav Jung, our visions become clear once we look into our own heart, hence who looks outside dreams; who looks inside awakens. The Danish workshop provided such an introspective aspect to this project since the root of all knowledge comes from the inner corners of ourselves and all the layers of our thinking.

The workshop began with an activity to accentuate the unfair division of wealth in our society, where minorities are unable to acquire even the small number of necessities for life… We were divided in different social classes; some were with tied up feet or hands to symbolize people with physical or mental disabilities. They instructed us to start and collect the chocolate coins placed in the middle of our circle and on the count of three most of us had already scrambled everything, leaving the tied-up individuals empty-handed. That was the perfect exercise to evoke empathy. In the end, we ended up sharing the chocolate coins with the other participants if the coins didn’t already end up being eaten, which is another moral of the story: don’t do anything on an empty stomach.

The workshop finished with activities when we created a little introspection and retrospection of our lives. We drew our life, our goals, wishes, ideas, hardships… We placed our circle of life on paper and later presented it word by word. Some were detailed from beginning to end, some more reserved, however, by the end experiences were shared, and even tears were shed. Hearing about the heart-wrenching past of a newly made friend struck us, reminded us to be grateful for the things we already have. Things as basic as a roof over one’s head, food on the table, a family to care for… Essential for life yet overlooked when we live in this fast-paced, developing society trying to keep up with its rapid flow. We just tend to forget to always be grateful, even for the bare minimum that life has given us.

No one was nonchalant when that chapter of the project was done. Everything we heard and learned was left there in the middle of Park Dora, where the past meets the urban present. – Elena Stojkovska

This workshop took place in another park with a football, basketball, and volleyball playground. I have to say that this workshop was the most energetic with a lot of games. Everybody was having fun. The most challenging game we had as part of the workshop was bingo during which the teams had to answer quizzes, debate among each other, share experiences and opinions of feminism, the unemployment of young people, etc.  – Bisera Soleva

Our team organized a theatre workshop called “The theatre of the oppressed”. Sadly, a lot of people are witnesses of discrimination and oppression in their environment daily, whether it is in their classroom, in their workplace, in the society that they live in, etc. Our goal was to present the work conditions and the helplessness of the textile workers who are barely managing to make ends meet, their silence to the issue, and the ungratefulness of their superiors.

We acted out a scene where a female worker was fired from her workplace because of the greediness of her boss, not wanting to give her a pregnancy leave, because according to him that would be a loss for the company. In this situation, the manager can, and has the right to prevent this from happening by reporting the case to the authorities, but fails to do so, due to the fear of losing his job and not getting anything out of it. I’m sure that at least once in our lives, each one of us was either a victim or bystander. Whether we were one or the other, we should always be aware of our rights, the strength within each one of us, and the things we can achieve by fighting for what is rightfully ours. Never remain silent, always seek justice and speak up for those who are not able to. Maybe today you’re not the victim of oppression, but who knows what tomorrow will bring. Put yourselves in other people’s shoes and do not let anyone struggle silently. Be the voice for the voiceless and fight for a better tomorrow for all of us! – Stefan Nikolovski

This was my first Erasmus experience, so I didn’t have many expectations. The project was full of activities, but I was most impressed by the workshops of the participating countries and the intercultural nights. I especially liked the Portuguese workshop. It was concentrated more on culture and cultural stereotypes and prejudices. We came to know more about each other’s culture through sharing some thoughts on our national symbols, heroes, and customs. We were using the “cultural onion” technique in order to place these concepts based on their importance for us. We were able to share a thought of the general prejudices towards the participating countries as well. It was interesting to hear what people from other countries think about your country and mentality. This activity was useful because it made us more aware of the way how we perceive other cultures. – Stanislav Pachukov

All the workshops in the project were productive and quite useful because they taught us new things and helped us understand better ourselves, but the workshop I enjoyed most was the one organized by the Belgian team. The main topic of the workshop was human rights. Even though by law, everyone should be equal in society, it turns out that some of us are more equal than others. This was demonstrated by the game “One step forward” when the participants choose a role and moved forward depending on the opportunities their role has. I had the role of a politician, so you can imagine that for my role it was easier to get through the obstacles in life compared to someone with fewer opportunities. It made me aware of the fact that not everyone is enjoying their rights as they should be. Afterward, a discussion followed in when the participants talked about how they felt to be in the shoes of the roles they had and whether they would change something if they had the power to do it. – Kristina Stamenova

One of the highlights of the youth exchange was organizing a flash mob in order to spread the message of empathy, awareness, and acceptance.

We were in doubt whether we should organize the flash mob in the center of Turin or at the park called Dora, but in the end, we choose the park because there were a lot of young people playing around, and they were a nice target group as well. We were singing and dancing altogether, and we caught the attention of the other people out there, and they were entertained as well.

Our main goal with the flash mob was to raise awareness about equality in general, and the importance of having empathy and compassion through singing, dancing, and having fun. – Marija Ristova

Don’t wait for society to magically change overnight, because it’s never going to happen. Take an initiative and remember: change begins with you! 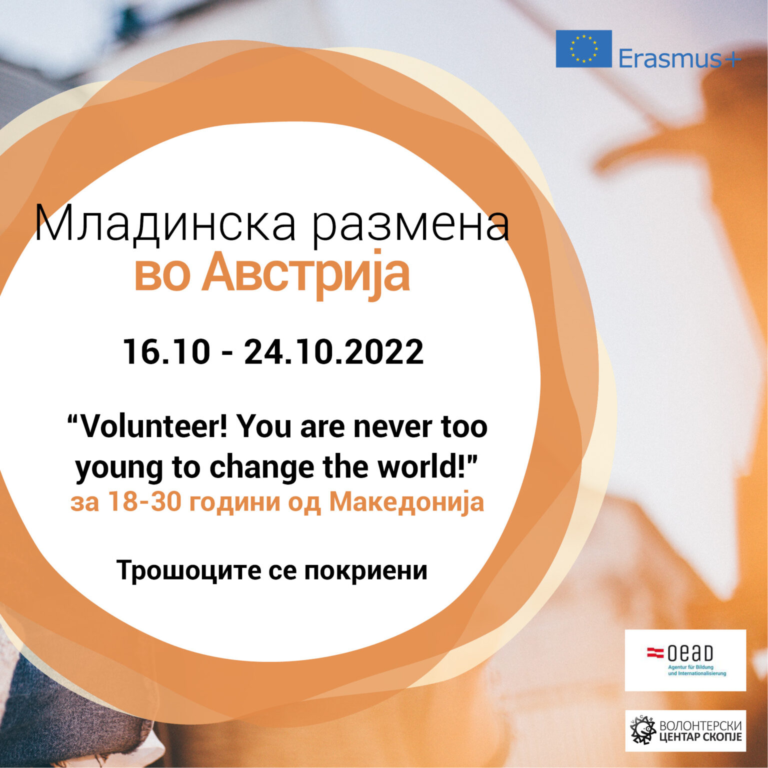 Volunteers Centre Skopje is looking for 5 participants (18-30 years old) and 1 group leader (+18 without age limit) from...